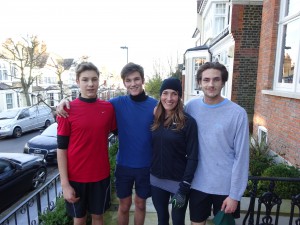 I love my Birthday Run. This is the one day of the year when I get  my favourite gift of all…a run to the Heath with my boys. There are the usual delay tactics: lost trainers, sore toes (sore head)…any excuse to bail out, but I’m pretty determined with this one as it’s just about the only day of the year that they can’t say no. People are always saying to me that I must have a very fit family with all the focus on exercise in my own life. Curiously, it doesn’t actually work like that- just because running is front and centre in my life doesn’t mean that my family is also mad on running. They do like to stay fit and have their own way of doing that, such as gym, cycling, tennis, golf (yes, golf is a sport), however they are not quite as keen on running as myself, which of course I find baffling and yes, I admit it…a little frustrating. When they were younger, I tried all sorts of techniques to get them into running. One summer I started a running jar, where they got a pound coin for each lap of Highgate Woods, with the idea that at the end of the summer they could keep a portion of the money and a portion would go to their chosen sport charity. My intention was that by the end of the summer that they would have established a solid habit of running just because it felt so good! Like most of my hair brain schemes, it didn’t quite work. Often I’d repeat the message, that if you establish a habit of running now, when you are young, then you’ll have it for the rest of your life, which means you’ll have a completely free and fully transportable way of de-stressing and maintaining a strong heart for … ever. However, as a mum, this usually just sounded like a nag to their ears. One day, their “mad for running” gene may gradually surface. For now, I just live for the annual Birthday Run!

Personal Training and ‘One to one’ Yoga

The incredible benefits of being outside in nature featured in Platinum Magazine: http://www.green-fit.co.uk/green-fit-features-in-platinum-magazine/

and in The Daily Telegraph:
http://www.telegraph.co.uk/sport/4347784/Personal-trainers-booming.html